Quarto Posto : bringing the outskirts to the centre


In Quarto Oggiaro, some students and young professionals created Quarto Posto, a place to socialize, discover and experiment. In this troubled north-west Milanese neighbourhood, these young volunteers approach the children, teenagers, parents and retired people living there, but also other Milanese people. They want to make different cultures meet, to organize games and creative workshops, to raise curiosity. Flavia, Marina, Pietro and the other team members observe, understand, suggest, create links and highlight new perspectives. 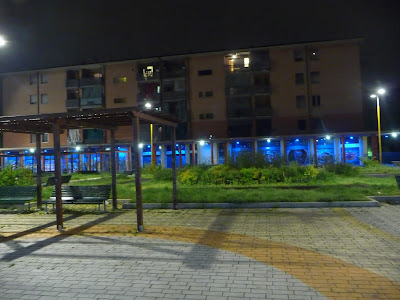 While Flavia is driving from the metro stop Affori Centro to Quarto Oggiaro, I tell her how the hotel employee reacted when I told him that I was going to visit this neighbourhood by night: “It's like the Bronx there!”. Flavia seems to find it funny but stays enigmatic. Like if she was thinking: “not exactly true, but not so wrong either”.

Capuana is a little square surrounded by blocks of buildings. It looks like it has been renovated recently. The lawn is light green. The blue light makes the ground floor passages brighter. According to Flavia, this peace in the evening is misleading: “During the day, children are everywhere, particularly in summer. It is full of life. This square is like a country in itself”.

We arrive in front of a closed awning where “Circolo Arci Itaca” is written. “Our group is set up in this Circolo Arci managed by old people”, explains Flavia with a smile. In Italy, Arci is one of the rare lay associative networks; it relies on the initiative of some volunteers who gather in “Circoli” (“circles”). Such as Itaca and Quarto Posto, each Circolo has a specific project. These projects follow a philosophy which promotes the inhabitants' participation and social cohesion. 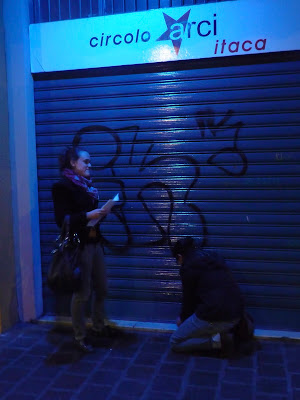 Marina is waiting for us. The two young women open the bar and make some coffee. Soon, Pietro joins us. After showing me the place, the three friends sit down and tell me their story. 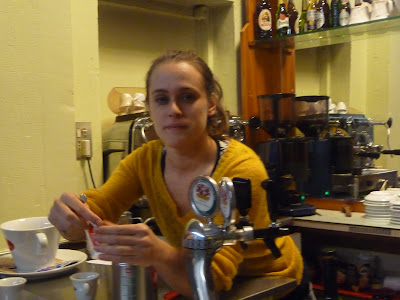 Flavia at the bar

"To hold one's head high and keep it high" are the words of Quarto Posto, a group created in 2011 by 8 youngsters – aged on average 25 – around the neighbourhood Quarto Oggiaro. Two main characteristics bring them together: they all intend to become social workers and all grew up in the north-west Milanese suburb. When I ask them where their project came from, they evoke their attachment to this suburb and the particular link of one of them to Quarto Oggiaro. They also talk about their passion, about their will for challenge and collective adventure.

Tough problems concentrate in this neighbourhood, which is a symbolic place for drug dealing in Milan: mass unemployment, families without any balance, youngsters without points of reference involved from childhood in stealing and trafficking activities... Moreover, a disastrous image is associated with the district. From this, a challenge is born: how to transform these outskirts into a place to be? “Relocate Milanese movida, this is an interesting perspective!”, says Marina. 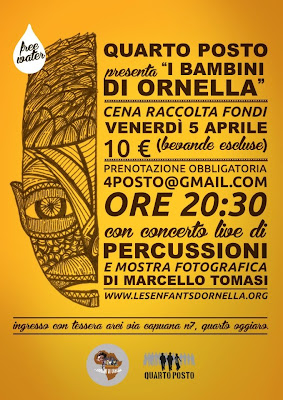 Following this idea, the youngsters of Quarto Posto start to organise parties, book presentations, concerts, film projections... An attractive program to renew Quarto Oggiaro's image. To make new people come to the neighbourhood, to mobilize its inhabitants, to create stimulating socialisation opportunities and to highlight local talents. “To bring the centre to the outskirts and the outskirts to the centre”, Pietro sums up.

To rely on local resources

With an auto-financing model, the group tries to highlight local resources. Thanks to the money earned at the parties on Fridays, Quarto Posto supports the bar Itaca, organises activities such as artistic workshops or soccer tournaments and creates educative projects for the neighbourhood's children and youngsters. 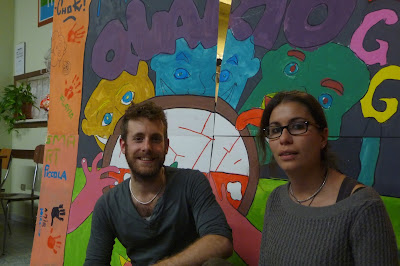 For three months, working with educators from other local associations, Flavia paced up and down Quarto Oggiaro's streets to meet and support children left to themselves. “With these positive experiences, we want to show these youngsters that one can see things differently, that one can invent something else”, Flavia explains. According to her, such a project's success relies on knowing the local fabric: public, private and associative actors. This is the solution to pass on the baton efficiently.

To let oneself being tamed

"At the beginning, people were asking us where we were from”, tells Marina, laughing. “We were not from Quarto Oggiaro so we were considered as foreigners”. Flavia's car was even vandalized. Nowadays, although they still see them as weird people because they work for free, the neighbourhood's inhabitants trust Quarto Posto's youngsters.

In the same way, at the beginning, the retired people from the bar struggled to accept fidgety children at their place, especially as painting and other activities may create noise and messiness. Little by little, a reciprocal taming and a respectful collaboration were set up. Nicola, the bartender, helps to serve on Friday evenings. The youngsters refill a bit the coffers and give ideas to Circolo Itaca's board of directors. 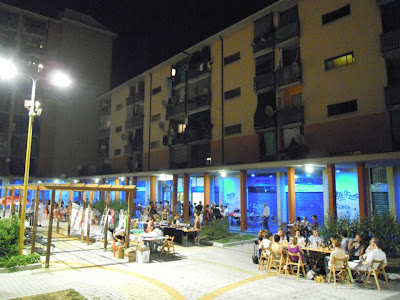 For Quarto Posto's team members, values are concretely expressed through ground commitment and collective decisions. Pietro explains: “We organised a few evenings with the association Libera in order to talk about the Mafia. This was a really strong symbol, for Quarto Oggiaro and for Milan in general. But we can not “do” Libera here. This would keep us from doing something else”.  “We are anti-Mafia, anti-fascists: these are our values”, adds Marina. “100 meters from here, they opened a Casa Pound office. This is a neofascist group. It was not possible to leave such a group being the only offer for the youngsters here. We had to give them an alternative”.

11pm. We leave from the bar Itaca. I take a last look at the small Capuana square. I can feel a kind of poetry there. Later, I read these lines about the project Quarto Posto: “A place to personally experiment the possibility to create culture, to rediscover the simplest social relationships, to become active citizens”.

What can we learn from the experience of
Flavia, Marina and Pietro?