Technologies to get around handicaps and to make talents grow


To give people with severe disabilities the possibility to communicate better and to be in a learning process, Simone creates A.I.D.A, a firm that offers software products adapted to each person's abilities. Simone became a computer engineer and an entrepreneur, despite his handicap. Therefore he wants to show people with severe disabilities and their private, educational and medical circles that anything is possible if one is convinced and equipped with a few well-conceived tools. Here is the story of my encounter with a young and passionate Italian, in the beautiful city of Modena. 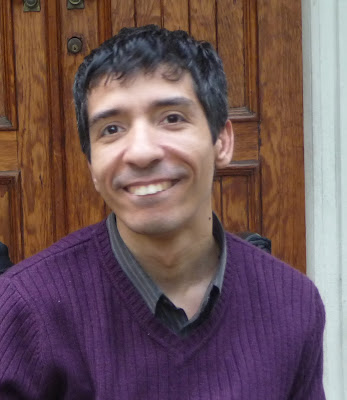 In September 2010, my Japanese friend Eri tells me that she is moving to Modena. When I was living in Milan, I was sharing a flat with Eri. My former flatmate will now work in the social company of a certain Simone. One and a half year later, Simone and Eri get married. I am really happy for my friend, but this news also raises questions. Simone is about thirty years old. He is a computer engineer. And he has a rather severe motor disability.

Thanks to Google, I discover dozens of articles and videos about Simone Soria's incredible path.  Simone always has a gigantic smile. Despite all the difficulties that he has to face, he considers himself as a privileged person.  As such, he wants to use his private and professional expertise to help other disabled people to communicate better with their surroundings. I do not need long to decide: when I pass through Italy, I am going to visit Eri and Simone.

On the Via Emilia, Modena is halfway between the Po valley and the Adriatic sea. Eri is waiting for me at the station and drives me in a van to the house, which is also the office of Simone and his colleagues. The team is talking to a family, a young man in a wheelchair and his parents, who have come from Rome to discover the different software products and services offered by the firm.

A bit later, I meet Simone. His eyes sparkle with curiosity towards me; he ponders on my investigation. The young engineer tells me about the visit of the family I have just seen: “I asked them a few questions to understand their needs: to use a computer, to study... Then I showed them FaceMouse, one of the software products we offer, conceived for severe disabilities”. By that he means disabilities that are more severe than his own. Simone assures that he conceived this software for others, just like a game.

Little demonstration: Simone, sitting in front of a computer equipped with a web cam, sets focus; a few seconds later, his nose becomes a mouse. Small head movements steer the mouse on the screen, breaks are equivalent to selection. 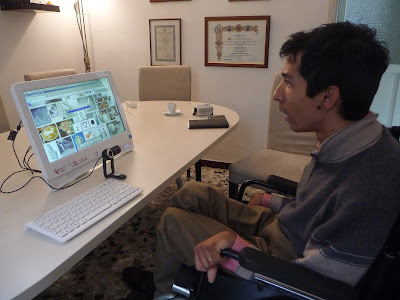 The first aim of this software is to give people the possibility to communicate without voice or hands. However, all the functionalities of a computer are available: word processing, Internet browsing, games... The key point of the program: it can be entirely personalized, from the command to the contents, according to the user's motor and cerebral abilities.

Will power and love for others

Simone is proud of his path, which is understandable. To become what he is today, he came across “a lot of positive circumstances, some also negative, or at least seemed negative in the beginning”. Above all, Simone is particularly talented to create a favourable context around him.

Born with an infantile cerebral paralysis, Simone suffers from spastic tetraplegia and from other problems, particularly regarding verbal expression. In Italy, since the end of the seventies, there have been no specialised schools anymore. Like most of the disabled children who go to school, Simone was integrated from an early age into an ordinary school, with a “teacher for support”.

In a text that he writes after his school time, Simone analyses his relationships with the adults who were around him and with his school mates. Simone quite early understands  a fundamental thing : the degree of autonomy that he would be able to reach depends on the quality of his relationships with the others. First of all, for practical reasons: being able to study in good conditions requires the consideration of his particular needs and the adaptation of the work places and tools. But also and mostly for motivation: feeling good with one's surrounding is essential to keep up efforts over time and to forge ahead. 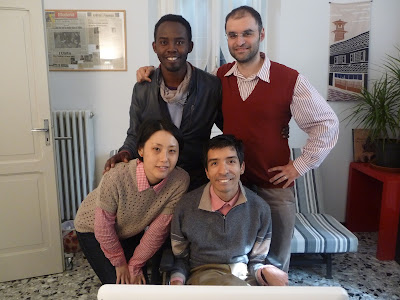 At the end of elementary school, Simone starts to use a computer. He can type thanks to a helmet with a kind of antenna. He attends the same classes as his mates and, during the breaks, practises this tedious typing technique. In secondary school, Simone starts to play chess and wins some provincial tournaments. “Thanks to sports, one learns to behave with others, to fight in order to reach a goal, to suffer, to react in order to be happy later... These are important elements for anyone's life, but even more for someone who experiences difficulties due to his or her physical condition”, writes Simone.

The will to surpass himself and, more than anything, the will to be and to do like the others: two prime movers for Simone who goes to high school, to university and who finally graduates in computer engineering.

In his final thesis, Simone writes about the use of new technologies to improve communication between people with severe disabilities and the outside world. With a friend, he creates the company A.I.D.A. (“Ausili ed Informatica per Disabili ed Anziani » / “Tools and computer science for disabled and elderly people”). In the beginning, a help of the European Social Fund gave them the possibility to develop their flagship program, FaceMouse.

Year after year, Simone contacts families all over Italy, sometimes abroad. He welcomes them in Modena or visits them. The products and consulting services are for people with motor disabilities, and also for people with Down's Syndrome or autism. The idea is always to rely on computer possibilities to use the person's resources at best, to push back his or her limits. The aim: to give this person the possibility to be more connected to the world, for a richer life and an easier everyday life.

All together, 300 to 350 people have benefited from A.I.D.A services. “In eight years of activity, this is not much”, deplores Simone. “The main barriers are linked to the opinion society has on people with disabilities. They are not encouraged to do things by themselves, to make themselves understandable. In some regions, people are even more narrow-minded”. Really fast, the concerned person adopts this point of view: convinced that he or she does not have any ability, he or she does not see the point in trying. Simone holds up as an example a young boy from Verona who, after using the software for one minute, declares that he does not like it.

Despite his impressive CV, Simone also has to face these negative prejudices everyday. They particularly come from medical and educational professionals who often do not consider him as a valid interlocutor.  “Some of our programs are the only ones on the market and concretely improve disabled people's life; however, during all these years, only two doctors in Italy really accepted to work with us”, explains Simone. Our inventor is impatient, because he knows that, with more goodwills, it would be possible to go way faster and to improve the way of life of more people.

So Simone applies himself to encourage and advise parents, teachers and all the people who may help in revealing the abilities of the young disabled person they support. 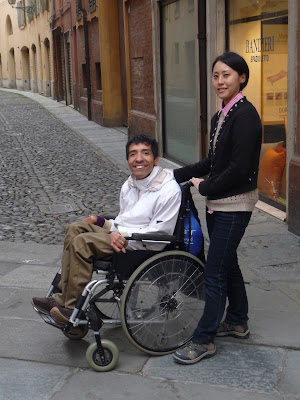 In the meantime, stories like his also make mentalities evolve. When I ask to Simone what the most beautiful thing in his story is, he smiles and looks at Eri: “To have met her, of course”. Simone decided to make a success of his life, and it seems that nothing can stop him... That is maybe the reason why a newspaper nicknamed him “the disabled guy who is not afraid to fail”. Why would you be afraid when you know, like Simone, that “a disabled person is only a person differently skilled”.

What can we learn from Simone's experience?