To share their passion for music with children from poorer backgrounds, Arnault and Quentin have created Musique pour tous (Music for All) in their city, Issy-les-Moulineaux, in the Paris area. The young volunteers know that by running guitar collective training sessions for children who recently arrived in France they are learning as much as their pupils. I met up with Arnault, who is president of the group. 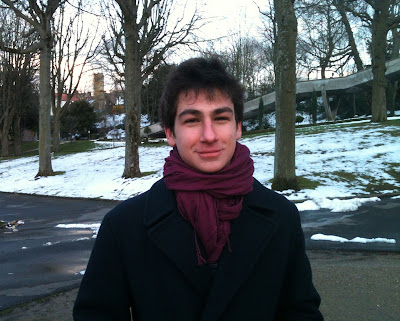 I am participating in “Dreamstoring Solidaire”, organized by Ashoka and Groupe SOS, in the prestigious premises consultancy group when I hear Arnault speak about his project for the first time. "I think that we are all convinced here that music has this extraordinary power to create long-term links that lead to self-confidence and well-being". A sentence that I can relate to, and instantly makes me feel like knowing more.

I meet Arnault in a coffee shop, not far from the buildings where Musique pour Tous organizes the guitar workshops twice a week, and he tells me about his background. He is aware that he grew up with all ingredients for happiness: a loving family, friends, sport, music. A lot of music. Music theory and piano conservatory classes, music course in secondary school, choir, self-teaching of guitar, first rock band…

In Issy, children and tutors

As they grow up, the young musicians get into different high schools. Still, Arnault and Quentin create a guitar duet, and would like to keep playing together. It is when Quentin’s high school asks their pupils to lead a community help initiative that the idea is born. Why not offer music learning sessions for kids who never had the opportunity to touch an instrument? Music is often perceived as a luxury when for the two boy, it is a universal right! The logic is simple: share their passion to children, and, hence, get to know each other better as music partners.

"We are convinced that music has this power to bring people closer. We entered that project convinced that it will not get in the way of our daily activities, but will benefit everyone." 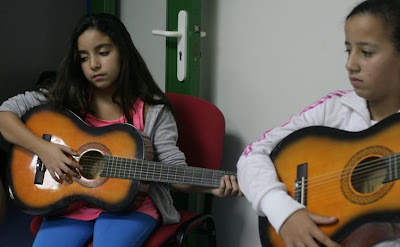 A lot of energy and a few administrative issues later, the two boys give their first music training session, in Autumn 2011. They have approached ASTI (Solidarity Society for Immigrant Workers), which welcomes kids from immigrant families every night after school. They help them with homework and offer extra-curricular activities. ASTI opens its doors to the young musicians, who then open four curious and enthusiastic children to guitar playing.

Early 2012, things accelerate: the Musique pour tous helping group is officially registered thanks to Issy-les-Moulineaux’s Cultural Centre. They receive their first funding, which allow them to buy seven guitars to lend to their pupils. They also take part in the "Dream it do it: Young Changemakers" contest, organized by Ashoka.

"During these six months, we were always running on adrenaline, it was a defining moment of my youth", says Arnault enthusiastically. What I like is looking for solutions. Ashoka tells us that our ideas deserve to be heard, and give us confidence for our next projects. They receive help to better formalize their project, and then the two founders of Music For All are awarded a prize. 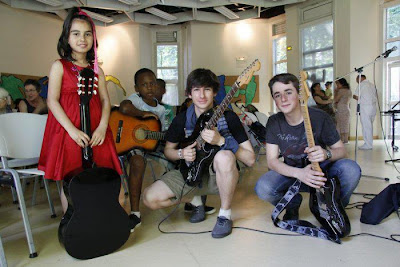 Before the summer holiday, some of their pupils perform "Smoke on the water", from the Deep Purple, in front of an audience of 50, gathered for ASTI’s annual party. Arnault and Quentin are accompanying with electric guitars; the parents are delighted. For Arnault, "it is from that moment on that we understood that we had a responsibility towards the children". The two founders then decide to accelerate things: they start recruiting new volunteers. From September 2012, two weekly sessions bring together two tutors and six pupils, every Tuesday and Friday night.

The next step is to organize Music Pour Tous sessions in other cities of the Parisian suburbs, then, hopefully, the rest of France. Meanwhile, the two volunteers are about to enter difficult studies: the infamous « classes préparatoires », for French Business and Engineering schools.

But once again, this is no reason to give up. Quite the contrary: any difficulty is an opportunity to innovate. According to Arnault, "For students, the main issue when it comes to committing to charity work is time", so he is thinking about a sharing scheme where the presidency would be passed over for a definite period of time to other volunteers. Other students, young people in community service, but also retired or working people… plenty of possibilities are looked into to keep developing this inspiring project.

between kids from quite wealthy families and children from immigrant families, with often less privileged backgrounds, including children who arrived in France less than a year ago.

Welcome to my blog

Between April and August 2013, I am on the road in Europe in order to meet some young people who have launched social and cultural initiatives and to interview them about their path and projects. With this blog, I would like to tell you these meetings and to invite you to join in a reflection which mainly focuses about the question: how can we learn to cooperate?

Your comments are more than welcome: ideas, reactions, questions... Thank you, I hope to read you soon!
Publié par Unknown à 12:23 Aucun commentaire: